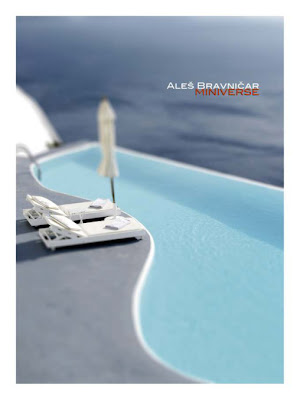 If someone would have taken the depth of field from any infinite vastness of the world it would instantly become a miniature, a simulacrum, an imaginary synthesis of true self and its virtual creation.

With the motto "small is beautiful" in mind I virtually destroyed the DoF and made an idealized imagery of virtual small spaces, full of intimacy and innocence. The places became radical illusions of themselves, a brave new world, my own Miniverse.

I am by no means the first to do so. Tilting and shifting by such pioneers as Olivo Barbieri, Naoki Honjo and Ben Thomas was already transforming urban and rural landscapes long before I got the idea. And every day you find something new, like this beautiful stop-motion miniature world by Keith Loutit.

The Miniverse photos will be on display again, courtesy of Galerija Fotografija -
MAY 30th, MARINA IZOLA/ISOLA, at 5PM.