I know where Batman is... 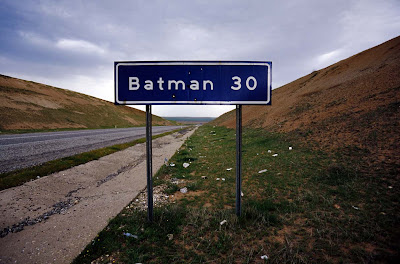 Southeastern Turkey. Batman next 30 km. Somebody *please* kick me.

But seriously, there is actually a funny anecdote linked to this town according to Wikipedia:
In 2008, Batman Mayor Hüseyin Kalkan began looking into the possibility of suing Christopher Nolan, director of Batman Begins and The Dark Knight, claiming Warner Bros had been using "Batman" without permission from the city, and "placing the blame for a number of unsolved murders and a high female suicide rate on the psychological impact that the film's success has had on the city's inhabitants."
Of course, no lawsuit has actually been filed.
Labels: travel