Have your photo turned into an embroidery? Sure, why not! 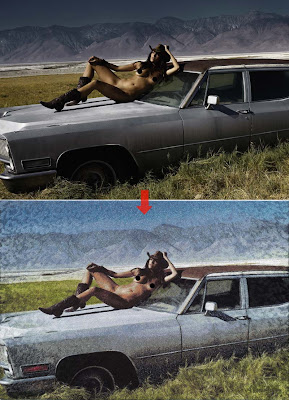 A couple of months ago I was contacted by an embroidery company from Ljubljana, Slovenia, which goes by the name of Ercigoj. It is a traditional family company that has been in business for almost 100 years. But what could one photographer expect from a company that does embroidery, banners and other sewing stuff? Probably something boring, right? Oh boy, was I wrong.

When I visited their office I was taken to a big gallery where works of art were on display. Big surrealist paintings, naive art, photographs, folk art, drawings and more. Upon closer inspection I noticed it was all made out of tiny strings of yarn. Boštjan and Jure, the guys behind Ercigoj, made an almost forgotten craft look good again. They call it eStitch.

So what is eStitch?  It is an innovative concept and a technique that creates embroidered images using specially designed $150K Japanese machines and locally developed human-machine interface. Basically they can transfer every image, be it a photograph or a painting, to an incredibly precise embroidery of detail and color transitions beyond compare.

They proposed to make one such canvas out of a photograph of my choice. I gave them an opening shot of Sara Jereb, which was used in 7 international Playboy editions around the world. “We will call you when it is finished” was their parting sentence. No deadlines, no pressure. So I waited.

When they finally did call and brought the end product on the table back at their office I stood in awe. Before me was a 100cm x 70cm (3.3ft x 2.3ft) embroidery of one of my favorite photographs, made entirely of thread. It took 1.308.670 stitches (one point three million!), ten kilometers (6.2 miles) of thread in 65 colors and 70 hours of work to finish this masterpiece.

True, eStitch isn't something totally new: embroidery as a technique has been used for centuries. But never until now has it been developed to produce such detail and variety of colors, especially not from a photograph.

Now that is what I call revolutionary.