The February 2016 issue of Playboy Slovenia hit the newsstands this week. It is a content packed issue featuring great models and great articles. My Nataša Naneva pictorial, shot in Republic of Macedonia and Greece, is featured in this very issue and will ring a bell with all the STC attendees who had the opportunity of attending the Santorini workshop in October 2015. Several pages from this pictorial were shot during the two weeks of the seminar when I was in beautiful Oia, the very place that hosted the Shoot The Centerfold seminar workshop, giving lectures with Jarmo Pohjaniemi on the art of becoming a successful photographer and mastering different forms of lighting. 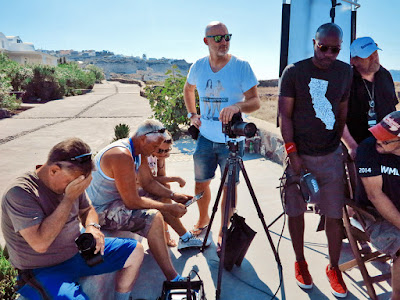 The attendees had the opportunity of witnessing the creation of a magazine cover from the very basic idea to the final edit with the help of Capture Integration's own Dave Gallagher, who brought three Phase One cameras to the seminar. I was eager to test one of them for my cover shot. Despite being a Canon Ambassador in Slovenia, I also own several other camera brands (Hasselblad and ARRI to name a few) and am always up for a challenge with new gear that comes my way. Using two Canon bodies (the 50 megapixel 5DsR and my faithful compact G1X) for the rest of the pictorial, the mighty Phase One was a logical choice for seamlessly combining the strong mid-day Santorini sun with powerful Hensel strobes on this photo session. 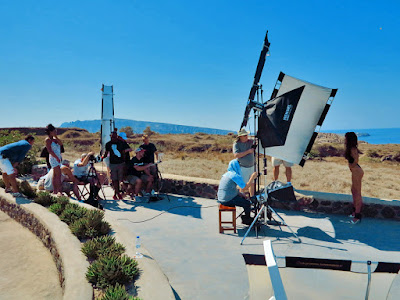 I started setting set up the scene around noon, facing West towards the sea. We were tethering to a 17" MacBook Pro with the latest version of Capture One and to an iPad for instant focus confirmation. Dave Gallagher took the DIT helm for the shoot. The camera I fired up was a Phase One IQ3 60 (with 60 megapixel CCD) and I mounted the Schneider LS 240mm/4.5 lens for the lovely bokeh and compressed perspective. Such set-up needed a sturdy tripod, so I put the camera on a Gitzo Series 3 with the Really Right Stuff ball head and L-bracket. 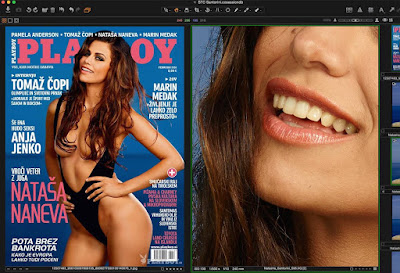 The strobes were all from Hensel: One Expert D 1000 with a 3x4' Hensel softbox at 7.8/10 power, one Expert D 1000 with 1x3' Hensel strip for fill below at 3.8/10 power, one Expert D 1000 with a 10-degree grid on a standard reflector and 1/8 CTO at 4/10 power for the hair and silhouette and finally a Ringflash around the camera lens, connected to the versatile Porty pack for a tender fill. I put a California Sunbounce PRO white/silver three-quarters to the left side and a black Sunbounce PRO three-quarters above to shadow the harsh mid-day sunlight. The light meter showed 1/500s at f/10 and ISO 100 and this was the setting for all the shots. 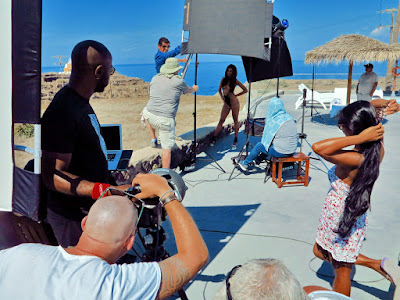 I shot the cover in less than an hour and in the evening, when the hot Greek air cooled down a bit, everybody at the seminar was participating in a live Capture One edit of the shoot hosted by Dave Gallagher. Jarmo and I were talking about what makes a photograph good or bad, what makes or breaks the pose and what kinds of pictures please the editors or make them angry. 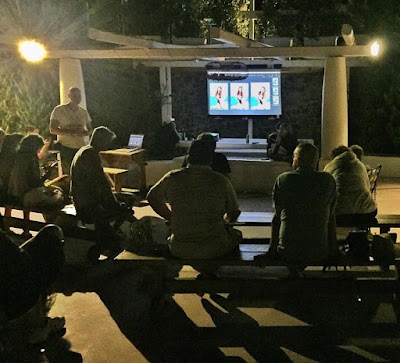 One of the shortlisted photographs from the session was published on this month's cover of Playboy Slovenia. It was a great pleasure having all the attendees involved in its process, hearing their opinions and together finding the best possible images for the cover shortlist. I can safely say now that we chose wisely. 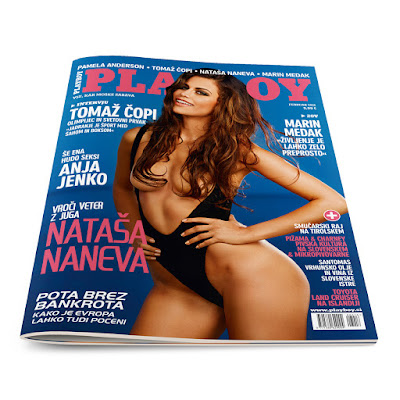 
BONUS: check the BTS video of the pictorial shoot below: